The Cedar Fire left an indelible mark on San Diego county. When it happened in 2003, it was the largest wildfire in California history. Just how big was the fire? And what caused it? The data set we saw in the previous section has these answers, but we still need to learn how to retrieve this information. 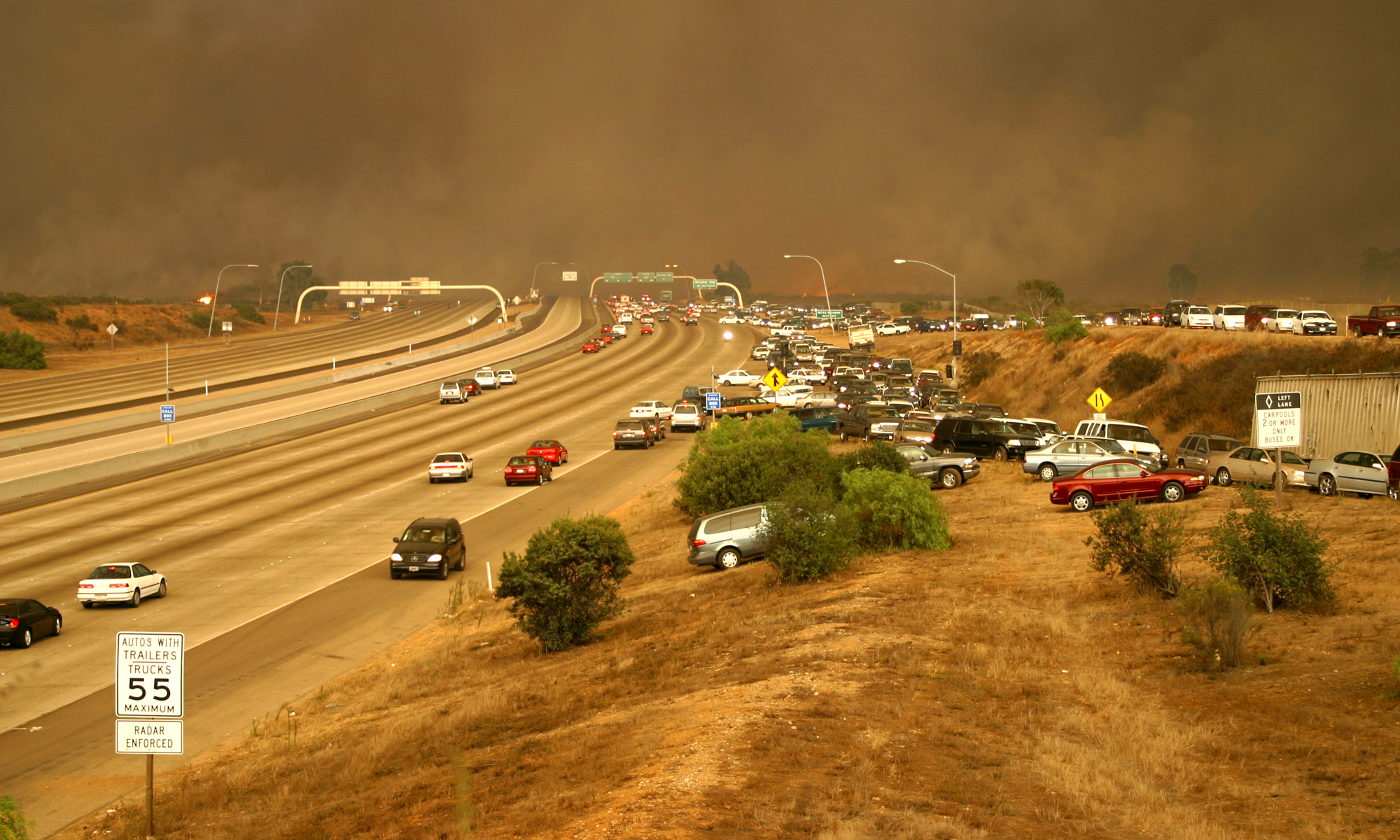 Fig. 9.1 Cars scramble to leave the 15 as the Cedar Fire crosses the highway and approaches Miramar.¶

Let’s begin by reading our dataset from a CSV and setting the 'name' column to be the index:

How big was the Cedar Fire? We know that we can retrieve the 'acres' column using the .get method:

The result is a series. We don’t see the Cedar Fire listed; it is there, just hidden within the ....

We can retrieve an element from a Series using its row label and the special .loc attribute. Since it looks like all the fires have their names capitalized, the row label for the Cedar Fire will be CEDAR:

To repeat, we can retrieve a particular element in a table, such as the size of the Cedar Fire, by first .getting the column containing the fire sizes, then using .loc to retrieve the size corresponding to the Cedar Fire. This is a pattern that we’ll be using over and over:

Let’s try it again: what was the cause of the Cedar Fire?

Originally, the Cedar Fire was to believed to be caused by a lost hunter shooting their rifle to get the attention of rescuers – thus the cause is listed as “Equipment Use”. However, the hunter later admitted that they had started a signal fire to alert rescuers, and that it quickly spread out of control.

What code would you write to determine the county in which the Frying Pan Fire occurred?

The Cedar Fire was truly huge, stretching from the Cuyamaca Mountains in eastern San Diego County, almost to the Pacific Ocean. But most of us don’t have a good sense of what an “acre” is. Instead, let’s frame the size of the fire in terms of other things we might be more familiar with. For instance, a soccer field is 1.32 acres. Therefore, the Cedar Fire burned:

Other comparisons are perhaps more surprising. The Cedar Fire burned:

One way to answer this question is to sort the table by the size of the fires. We can do this with the .sort_values DataFrame method. The method requires one keyword argument, by=, which should be given a string with the name of the column to sort by:

Notice that the table has been sorted in ascending order (from smallest to largest) using the values in the 'acres' column. Therefore, we see that the largest fire in California history was the Ranch Fire. At 410,202 acres, the Ranch fire was double the size of the Cedar Fire. It was part of the Mendocino Complex Fire, which burned in 2019. Although the cause of the fire is listed here as undetermined, it was later discovered that it began when a person tried to plug the entrance of wasp’s nest with a hammer and a metal stake. When they hammered the stake, sparks flew and caught the ground on fire. The fire resulted in $250 million in damages.

What if we want to come to the same conclusion programatically, without having to look at the table? After sorting, the last row of the table corresponds to the largest fire, and we want the fire’s name. This is stored in the table index. Remember that the index is essentially an array, and so we can get the last element of the array using square bracket notation:

Here, we are using method chaining to save typing.

Actually, we do not need to include the by= in this case: calling .sort_values('acres') will work just fine. But writing by= makes the code more readable.

We could have also made the same discovery by sorting the table in descending order. This is done by passing a second keyword argument: ascending=False:

If this keyword argument isn’t given, it defaults to ascending=True.

When sorting in descending order, we could get the fire’s name from the index by asking for the first row label:

We can also sort by columns containing strings. In this case, the rows are sorted lexicographically – that is, in dictionary order:

If you look at the help message for .sort_values, you’ll see that it can also accept a list of column names to sort by, like this:

In this case, the resulting table will be sorted by the 'year' column, but within each year the fires will be grouped by their size in the 'acres' column. Take a look: the fires occurring in 2018 are organized from smallest to largest. Sorting like this is mostly used for presentation purposes.

How large was the oldest fire in the data set? There are two approaches to answering this question. The first approach uses tools that we already know, but it requires a little extra work. The second approach uses something new: .iloc.

In the first approach, we’ll first find the name of the oldest fire in the data set. We’ll then use this name to ask for the size of the fire using our .get().loc[] pattern.

To get the name of the oldest fire, we’ll sort by year and look at the first element of the index:

Now we’ll use this as the row label in looking up the acreage:

This approach works, but there is a faster way.

After we sort the table by year, we know that the row we’re interested in is the first row in the table. But to access the entries of this row with .loc, we need to first find out that row’s label. Instead of performing this intermediate step, we can get the first row’s information directly with .iloc.

To get the size of the first fire, we can use .iloc directly, without knowing the fire’s name.

This is equivalent to using .loc with the column name: